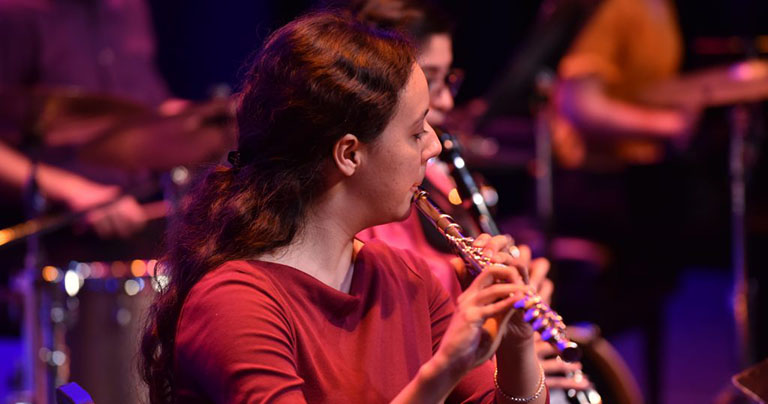 The UCF New Music Ensemble will present a concert of music for mixed chamber quartets in collaboration with the UCF Composition Studio. The performance will feature 12 world premieres of brand-new works for mallet quartet, wind quartet, and two mixed string and percussion quartets.

François Casadesus (1870-1954) was the first child in what would become a family of accomplished French musicians at the turn of the twentieth-century. Led by his father Louis, a self-taught violinist that worked as an accountant by day, seven of nine children would become professional musicians, with even more dedicating their lives to music in the following generation. François Casadesus is best known for his time as a conductor with the orchestras of the Paris Opera, L’Opera-Comique, and a Radio orchestra based in Paris. As a composer, he achieved international success with his ballets and operas. Casadesus was an advocate for musicians that were mobilized, captured, or killed during WWI, creating a series of reviews called La Musique where he featured their works. He also worked within the realms of higher education and music business, serving as the founder and director of the American Conservatory in Fontainebleau that had many notable students, including Aaron Copland and Augusta Read Thomas, and as Vice-President of the French copyrights collection society, Société des Auteurs, Compositeurs et Editeurs de Musique (SACEM).

London Sketches: Petite Suite Humoristique is a chamber work for ten wind instruments and is Casadesus’ only surviving chamber winds work. Its three movements, each with its own distinct themes, serve as musical snapshots of the historic landmark within London it is referencing. “The Policeman in the Zoo” conjures imagery of a large policeman strolling through the London Zoo with a serious attitude and awkward stiffness that is comical in nature. Of “Trafalgar Square Idyll,” the composer describes that it depicts a nurse and policeman flirting “like a couple of old woodpeckers” while seated by the fountain of the Trafalgar Square. “Hyde Park” bears the subtitle “Children Play” and portrays the cheerful and kind nature of children playing in the famous park located in Central London.

Alejandro Garvía Caturla was a Cuban violinist, composer, and conductor of Spanish decent. He was the first child of a union between the Garcia and Caturla families, two of the oldest, most traditional, and influential families within the city of San Juan de los Remedios, which is also one of the oldest colonial towns in Cuba. Caturla was exceptionally gifted in many areas, performing as the lead accompanist for opera companies as a teenager while also earning a Doctorate in Civil Law at the age of twenty. Caturla would go on to balance a notable career as a lawyer and judge alongside that of a musician. During his studies at the University of Havana, Caturla became involved with revolutionary student groups, becoming great friends with other Afro-Cuban artist, like Alejo Carpentier and Amadeo Roldán. With these connections, Caturla was able to travel to Europe and study with modernist composers. Upon his return, Caturla would become one of the most prominent and influential composers in Cuba. His compositional style is a unique blend of modernist techniques with Afro-Cuban melodies, rhythms, styles, and instruments. Caturla’s greatest successes came from his interactions with American composer and publisher, Henry Cowell, whose connections led to Caturla’s orchestral work Tres Danzas Cubanas being performed by Leopold Stokowski and the Philadelphia Symphony Orchestra in 1932. Caturla was tragically murdered at the age of thirty-four by a criminal that was awaiting sentencing in his courtroom.

First Cuban Suite (Primera suite cubana) is a work for eight winds and piano and is in three movements, each depicting a popular Cuban music style- Sonera, Comparsa, and Danza. The work was premiered two years after it was written by the Chamber Orchestra of Havana with José Ardévol as conductor. Reviews of the initial performances of this work depict frustrations from the musicians in rehearsal along with an uprising from the audience that forced the music to stop during its performance. The newspapers held reviews that ridiculed Caturla, labeling the work as as a “monstrosity.” It was revived a decade later by Ardévol in a performance alongside works by Paul Hindemith and Julián Orbón, receiving an overwhelmingly positive response and resulting in Ardévol programming the work during his upcoming United States tour. Caturla’s biographer, Charles White, states that the work was one of the greatest representations of Caturla’s compositional intent to “transcend any one classification of style” by inventing completely new forms while infusing the sounds of his native Cuba.

The first version of Lefèbvre’s Méditation was composed for organ, string orchestra and two oboes. Lefèbvre then reorchestrated the piece for wind octet for a premiere given on March 3, 1887 in Paris by Paul Taffanel’s Société de musique de chambre pour instruments à vent. Neither version of Lefébvre’s Méditation were ever published, nor have copies of the originals been discovered. Organist and composer, Alexandre Guilmant, reduced Lefèbvre’s original version to create a solo organ setting. This was published in 1889 in Paris by Mackar & Noël, and was that version from which this currently available edition for wind octet was crafted – a reverse-transcription, as it were, but re-introducing this octet setting into the repertoire for chamber winds.

Hungarian composer, Frigyes Hidas, studied composition at the Franz Liszt Academy of Music with János Visky. After completing his studies at the Academy, he served as Musical Director of the National Theater in Budapest for over fifteen years before becoming Musical Director of the city’s Operetta Theater, a post he held until 1979. Hidas then focused on being a freelance composer,  writing for almost every genre, including operas, ballets, orchestral works, film music, and others. His name became known worldwide, however, through his works for wind ensemble and chamber winds. In 1995, Hidas received an invitation to join the World Association for Symphonic Bands and Ensembles (WASBE)

8+1 was one of the last pieces that Hidas wrote before he passed away. The work was written in 2006 for the Bolero Wind Ensemble. It features two oboes, two clarinets, two horns, two bassoons and a double bass, which will be covered by the bass clarinet in our performance. The work presents exciting dance-like mixed meters contrasted with rich and colorful romantic passages that intertwine its main theme and ultimately leading to a joyous finale.

Vignette No. 1
When the Sirens Call by Brielle Johnson

What Do You Call Human Meat? by Michael Delgado

The Strix’s Feast by Rachel Lee

Power Struggle: A Tale of Three Factions
I. “Glory to the Kingdom” by Alan Senn
II. “Hail to the Homeland” by Lincoln Miller

III. “Power to the People” by Valentine Hueckel